For those of you who have been a part of the Get Organized Challenge, you’ve heard me talk about the value of creating “holding albums.” Holding albums work great especially when you’re on track with a particular scrapbooking project. However, I, like most scrappers tend to be just “slightly” behind . My project last week was to get all of my photos that had been sorted by year and by event into groups by album. This was somewhat challenging on a number of levels:
1.) I create 3 sets of albums, one for each of my sons (London and Max) and one for myself.
2.) I have 2 different sizes of albums going (8.5 x 11 from when I first started and now 12x12).
3.) I had created some pages of some events for all 3 albums, but wasn’t consistent.
The hardest part:
The biggest challenge was just sitting down with a notebook and listing what I had created for each album and what still needed to be created. I have to admit while I dreaded this part of the project it wasn’t nearly as bad as I thought it might be. I started by opening all of the albums together and flipping through them so I could see each event in each book. That made it easy to list what was completed and what was missing. This part of the process actually only took about 15 minutes. I scribbled down notes in 3 columns; Family, London and Max. 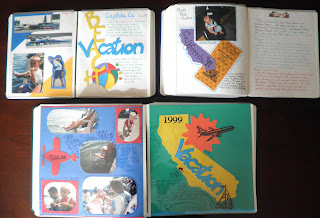 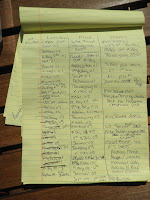 Next Step:
My next step was to cut lots of sheets of 8.5x11 paper in half and label each piece of paper with the themes/events/holidays, etc. that were missing from each album. I used a different color of paper to represent each person’s album. This isn’t necessary, but it helped to keep me focused when I was choosing pictures. I also noted which size album and how many pages I wanted for each event. As I created these labeled half sheets I crossed them off the list. 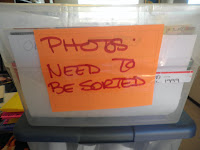 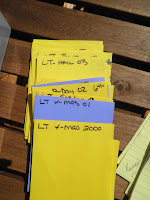 Choosing pictures:
My goal was to choose 6 pictures for each 12x12 layout and just 4 pictures for the 8.5x11 books. It really helps to make this decision in advance. You want to try to avoid creating 6 pages of your adorable 18 month old eating an Ice Cream cone. If you know you only get to choose 4 pictures for a single page layout it will be much easier to decide and move on.
Since the photos were already sorted into chronological order it was easy to go through them and make selections for each album. Any pictures that were left over went into my purge box. It was easier than you might think to put them in the purge box, because I knew I had what I needed for my scrapbooks. I was also able to comfortably toss out “bad” pictures.
As I choose the pictures I wrapped them in the half sheets of labeled paper and put them in my READY to SCRAP photo box – again, in chronological order.
I tried to keep the “purge” box in some type of chronological order. When my family visits, I’ll let my mom, sister, mother-in-law, whoever is interested, look through the photos and take what they want. After the purge box has made the rounds, I’ll be able to confidently throw whatever is left away. 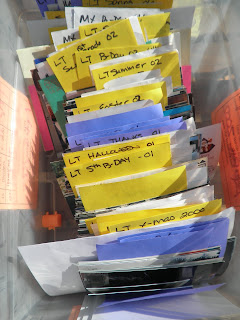 The Big Benefit
I’ll confess that it did take a few hours to get through the literally thousands of pictures that I had, but it was sooooo worth it! I went from over 4 photo storage boxes, down to just 2. There were several Labeled sheets, that I didn’t have printed photos for. I left these “empty” sheets in the photo boxes, in chronological order so when I come across them again, I will know I need to track down the photos on the computer.
Maybe now I’ll get “caught up” – LOL. 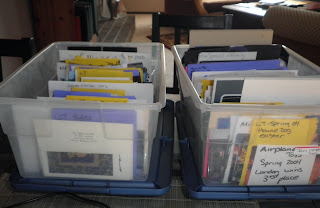 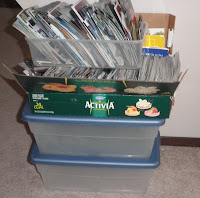 Start with the list!
Invest a little time in making lists of what is in your books and what is missing. This will REALLY help in the sorting process. If you have to constantly be going back to the albums to verify what you have / have not done it will get frustrating and overwhelming. My list initially just had “what was missing,” but I found myself constantly going back to verify what was “done”, so it ended up being more efficient to include both “missing” and “done” on the list.

Set yourself up for success.
Be sure you have all the tools you need; photos, photo storage boxes, paper, pens, etc. before you sit down to get started. If you have to leave your project to hunt for things you’ll get distracted.

This site uses Akismet to reduce spam. Learn how your comment data is processed.